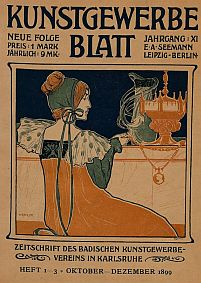 Kunstgewerbeblatt was a decorative arts journal published in two series - vols.1-5, 1885-1889; and vols. 1-28, 1890-1917. The focus of the first series, which was printed in the Gothic script, was primarily early and traditional German art. From the second series, the journal was printed in modern German script and the focus shifted to contemporary art, particularly Art Nouveau, and the German interpretation of the Arts and Crafts style. The journal includes well-illustrated articles on ceramics, glass, jewellery, furniture, metalwork, and surface decoration and, to a lesser extent, architecture.