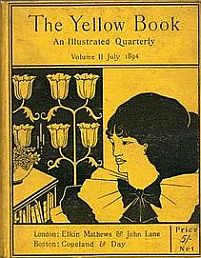 In their prospectus to Volume 1 (April 1894), the publishers and editors of The Yellow Book wrote that it was their aim to “depart as far as may be possible from the bad old traditions of periodical literature, and to provide an Illustrated Magazine which will be as beautiful as a piece of book-making, modern and distinguished in its letter-press and its pictures, and withal popular in the better sense of the word."

The Yellow Book captured the zeitgeist of the 1890s and, despite its short life, was highly influential both in Britain and abroad. Artists who contributed to the magazine included Aubrey Beardsley (who designed the cover of the first issue), Philip Wilson Steer, Walter Sickert, John Singer Sargent, Walter Crane, Charles Conder and William Rothenstein. Notable among literary figures that wrote for The Yellow Book were Henry James, H.G. Wells, Arnold Bennett, W.B. Yates, Edmund Gosse and George Gissing.